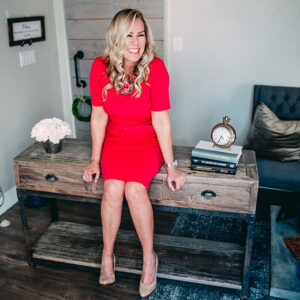 My Abuelita (Grandmother), Amelia, had wanted to become a Nun to serve God and her community. Instead, she was told at the age of 17 by her father that he had arranged for her to marry a man twice her age. My Grandmother had never wanted to marry nor did she want to have children, but she was obedient and did as she was told. My Abuelita Amelia died at the age of 57 when my Mom was pregnant with me from complications of diabetes and asthma and likely a broken heart. My Mom was only 27 when she lost her Mami. I’ve been told that my Grandmother had a furious temper. I’m sure any woman would be angry being denied to live the life that she wanted for herself. You see, generations continue to repeat themselves if we aren’t brave enough to break the cycle.

My Mom was anxious, depressed at times, and could be emotionally unpredictable. I was afraid of her. And the cycle continued.  I also experienced my own hurt and anger easily triggered by the pain of  my childhood and sadly it’s the children that suffer.  I made the choice to face my pain and was determined to break the generational cycle. I invite you into the same process that I discovered for myself. The huge difference is that you don’t have to do it alone. Welcome. I’m here for you.

From the anxiety I felt having to walk on egg shells and learning to hide my true wants and desires from a Mom that was struggling to deal with her own pain. And while therapy was a good start, I realized that what I really needed was a community to relearn what it meant to be cared for and supported.

Now that I am a psychotherapist, I am convinced that women would amplify their growth in a tribe of powerful women who refuse to pass on the negative patterns that they experienced. Instead, collectively they would encourage each other to break the cycles to create a better world for their children and leave a loving legacy for their grandchildren.

This program was designed to help you walk through the steps that I personally took to heal my heart and to create a beautiful mothering experience with my six daughters and four sons.

You do not have to figure it out alone. I’m here for you!

This coaching program is ESPECIALLY for Moms ready to grasp the enormity of the importance, impact, and influence of motherhoods. For Moms tired of staying in victim mode and ready to dump the excuses, guilt, and pain that keep them stuck. Are you OVER letting the fear, doubt, and the worry win? If you’re a woman willing to make changes to create a loving legacy, then this is for you!